On May 10, 1891, about 50 members of Macon’s First Baptist Church of Christ assembled in the home of Capt. John L. Hardeman to constitute Vineville Baptist Church.

This very strategic section of Macon, named for the vineyards which once dotted the landscape, was a fast-growing population area and a fertile field for a new congregation of mission-minded believers.

Rev. Rollin Daniel Mallory of Griffin was called as first pastor, and the church was received into the Rehoboth Baptist Association at the annual meeting in October that year. While a chapel was being constructed, the growing congregation met in the Lamar mansion on Lamar Street. 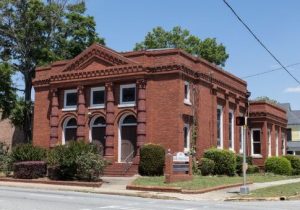 e first frame building was soon complete and soon was too small as the church experienced heavy growth. That led to constructing the church’s first permanent structure, a lovely facility located at the corner of Lamar Street and Vineville Avenue. That building, which is still standing, was used until the church constructed and occupied the current building at the corner of Vineville, Pierce and Pio Nono avenues in 1924.

Major building programs provided a three-story educational annex in 1952 and another large two-story facility in the 1960s. The church’s activities building was completed in 1970.

To share the love of Jesus was always the goal of Vineville Baptist Church which over the years has sponsored and participated in mission trips and incentives locally, in Georgia, in the United States and internationally. Multiple staff ministers have been called in the areas of education, music, families, youth, and activities, allowing the church to provide notably fine programs and training opportunities for all ages.

Through the decades Vineville has founded four missionary starts which are now Macon churches. These include Ingleside, Highland Hills, West Highland and Vineville North (now Northway).